In May 2020 Starboard set out to provide an enhanced picture of southern bluefin tuna fisheries in the Tasman Sea.

Southern bluefin tuna, one of the world’s most valuable commercial fish stocks, have served as an unfortunate reminder of the negative impact of overfishing on the high seas. The species was deemed critically endangered in 2009 after it was estimated that the fishery was at just 10 percent total reproductive output (TRO 1) compared to unfished levels 2.

Appropriate management of the migratory southern bluefin tuna–which travel thousands of kilometres in their lifetime–is vital to protect not only the oceans but also those that rely on this tuna species for their livelihoods.

This management is delivered through the Commission for the Conservation of Southern Bluefin Tuna (CCSBT), an intergovernmental organisation which administers the global catch limits as well as provides monitoring, control and surveillance (MCS) frameworks for the eight countries that participate as extended members.

Stock assessments in recent years have shown that the species has recovered to 20 percent TRO, relative to the unfished population 3, due in part to this collaborative effort.

An important part in managing the sustainable use of fisheries is the ongoing work to eliminate Illegal, Unreported and Unregulated fishing (IUU), an issue on which Starboard Maritime Intelligence is focused.

New satellite capabilities and data science techniques enable monitoring of vast areas of the ocean–previously not possible using aerial and surface assets–and the detection of dark vessels through the fusion of multiple information sources.

For several years, the team at Starboard has been actively researching how to use satellite data to assist with vessel detection. Each data type has its advantages and disadvantages when it comes to finding vessels. Knowing which is the best to use for the conditions is key to successfully monitoring the maritime domain.

There are several providers available for each of these sources of satellite data and they are continually working to improve their technologies and processes.

For the 2020 Tasman Sea operation a combination of these was used including Airbus, MDA and Unseenlabs. The providers were chosen based both on their coverage for our area of interest and their ability to detect fishing vessels.

Preparing for a satellite surveillance operation

Satellites collecting RF, SAR and optical data cannot continuously observe the entire planet. You need to have them tasked–directed to collect the data you require–as they make an overpass of your area of interest.

Part of learning how to use the different types of satellite data successfully is understanding which data are most suited, as well as knowing when and where to look. Once you know this you can work with satellite data providers to task a satellite for your data collection.

It requires precision and planning to get these requests right, especially over the large expanse of the ocean.

Prior to the Tasman Sea operation in 2020 we spent much time in preparation and investigated the previous five years of fishing activity. The result of this work helped us determine which flag states would likely be fishing in the area of interest, and what their historical fishing activity looked like.

With historical fishing activity as a guide, we were able to task multiple satellite sensors to ensure we were targeting the projected areas of high activity repeatedly over the two-week operation.

The day to day running of a satellite surveillance operation

Each day we were able to monitor an area of 760,000 km2, more than twice the landmass of Aotearoa New Zealand. Over the 14 days of the operation we accumulated data covering nearly 11 million km2 of the ocean.

To achieve this scale of monitoring, there were on average two satellite data collections made each day—a total of 25 over the May 1-14 operation.

The satellite information gathered was viewed in real-time, with a daily 4pm briefing to further discuss the new data gathered during the prior 24 hours. Insights included fishing activity, vessels entering the area of interest (AOI), and–through the fused satellite data–identification of dark vessels. Additional sources of information such as sea surface temperature (which affects tuna movements) were also taken into account.

Satellite surveillance operations offer a lower cost method to illuminate activity in distant waters, and are an effective way to direct aerial and surface assets to inspect vessels of interest.

Here’s what we uncovered during the surveillance operation:

RF detections on the 4th, 5th, 6th and 8th of May. Measurement tools indicate that detections on different days could be coming from the same vessels because the distances moved are around 100km. The sea surface temperature in this area would have been suitable for southern bluefin tuna.

Visit our Operation 18c event page to learn more about the planning, tasking and analysis of satellite technology for surveillance → 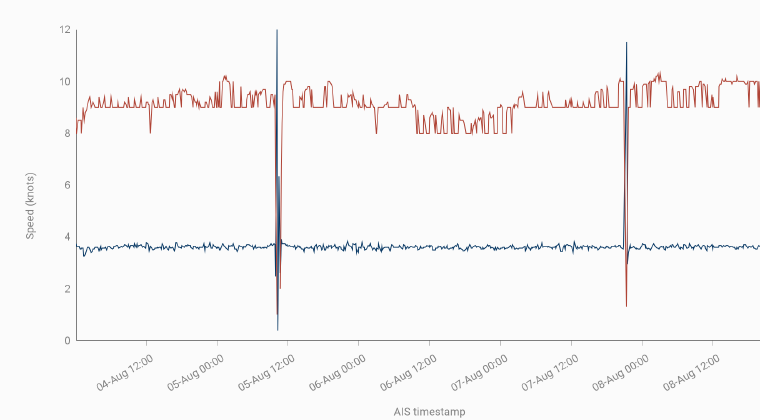 Amongst the millions of ship positions, how can we find movements that are not normal? How can we find anomalous movements leading to the discovery of vessels that might be noteworthy and need further investigation? 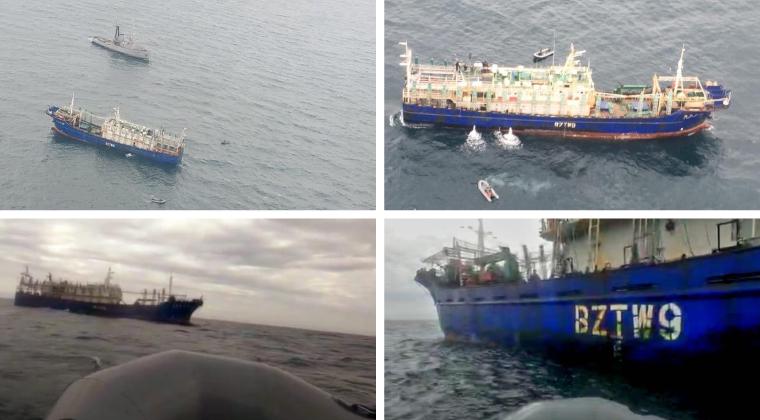